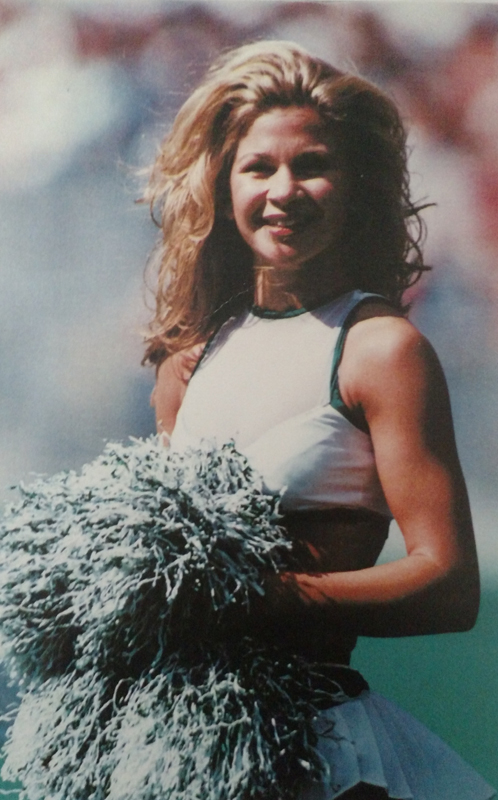 April Lewis was born to move. As early as 6 years old, one could find her parked in front of the TV watching Morning Stretch with Joanie Greggains or boogying with the dancers on Solid Gold. As she got into middle school, she and her girlfriends—who’ve become lifetime fitness pals—routinely popped in VHS aerobics videos and worked out together. At 13, they all joined a gym. Noticing how much more energized and less stressed she felt, April kept working out—taking a variety of classes, including weightlifting, step, and dance. In school, she was a natural at cheerleading and joined the squad.

As the Pennsylvania native got older, April focused on getting an education in business development while her lifetime habit of fitness continued to fuel and energize her. And it was ultimately the physical challenge, coupled with her love of music, that inspired her to audition for the Philadelphia 76’ers Dream Team—even though she had no formal training as a dancer. She made the team and stayed with them for 2 years. Then she set her sights on the next big challenge. That’s when she auditioned for the NFL to become a Philadelphia Eagles’ Cheerleader—and again made the team. She remained there for the next 3 years before finally deciding to re-focus on her career—doing business development for a tech company.

Now at 45, April is still as active as ever and continues to set her sights on new challenges. She’s been dedicated to spinning for the past 8 years and continues to take spin classes on a nearly daily basis. She also regularly takes Pilates classes, which help strengthen her core and back. She’s now on a serious strength training regimen where she performs a grueling 40-30-20-10 pyramid of reps for a single exercise—40 reps, followed by 30 reps, followed by 20 reps and ending with 10 reps. She does 3-4 of these pyramid exercises per large body part and 3-4 per small muscle part. In between pyramid sets, she’ll add in a core exercise also using the 40-30-20-10 pyramid setup.

Even with a busy lifestyle that includes a successful career and a family, April refuses to let fitness take a backseat. She recognizes that she is up against the clock each day and that if she doesn’t prioritize that time with herself, she won’t feel as rested and present in other areas of her life. She is so committed to challenging herself physically, that she even makes a vow on her birthday to run 1 extra mile each year—even though running is her least favorite activity.

Another motivating factor in April’s life is her relationship with her husband, Stephen, who goes to the gym with her everyday and has also made fitness a lifelong priority. Though they knew each other since they were kids—went to the same high school, lived 10 blocks away from each other in Philadelphia, traveled in the same social circles—it wasn’t until September 2013 that the two reconnected and fell in love. They were married 2 months later on 11/12/13 and it’s been health conscious love affair ever since.

It’s clear that April has no interest in shortcuts. Health conscious living is simply a part of her life. Her tips for living well are honest and straightforward: Get lots of sleep. Eat veggies and fruit. Keep your sugar low. Drink wine. Manage your stress. Workout.

What initially motivated April to look for life insurance was she wanted to ensure that her 13-year-old daughter would be taken care of if something were to happen to her. Though she had life insurance through her employer, she was intrigued when she continuously saw an online ad that catered to spinners and other health conscious people. So April reached out to Health IQ. After an initial conversation, she had her home physical appointment arranged and a week after that appointment, she had a policy in hand.

When asked about her experience with Health IQ, April said, “I saw an ad multiple times online and it mentioned how the BMI on a health conscious person might be higher—which according to traditional life insurance companies might put one at higher risk. There was a different mindset at Health IQ based on physical activity and body density. I was intrigued. The application process was very easy. It just made a lot of sense to me. I turned my husband on to Health IQ and he is looking forward to going through the same simple process of becoming a policy holder and providing security through fitness to our family. I’ve cut and pasted your ads into messages to friends on Facebook and I’ve recommended you on LinkedIn. I just think you are a great organization.”

We at Health IQ commend you, April, for prioritizing health conscious living—all the way up to the big leagues. You are truly one of the unsung heroes for whom we built this company.

Benefits of Walking for Health: How Extra Steps Extend Your Life

Getting Smart with Home Devices: 5 Ways to Improve Your Life

Tips For Improving Athleticism And Being More Competitive

Coffee Won’t Give You Cancer But Hot Drinks May