Health Hero Jimena Sayavedra On Giving Back to the Running Community 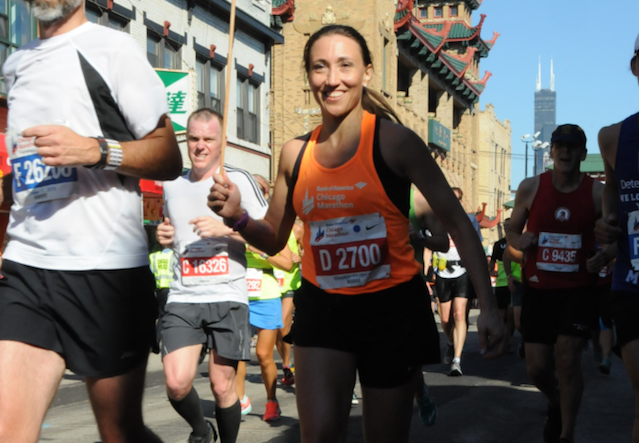 For Argentinean-born Jimena Sayavedra, running has always been a part of everyday life. Her father, a cardiologist, was a runner and every day without exception, he would get up at 5:30am and go for a run before heading to the hospital. His warm-ups, which consisted of jogging in place for a few minutes, would wake up the whole house.

Jimena, like her father, was athletic by nature. She began playing field hockey at age 6 and swimming at age 8. As she got older she became captain of her field hockey team, where she excelled in the sport and traveled to compete in national tournaments. However because her school schedule kept overlapping with her training schedules, she had to step away from competing in both sports at age 15.

So she literally followed in her father’s footsteps and focused on running. She began with duathlons—races that combined running & cycling—as well 5-10k running races. But a visit to New York City at age 28 inspired her to run further. Her uncle lived there and when she saw him, he told her about his experience running the New York City Marathon. Jimena dreamed of running through the streets of New York—a city that fascinated her due to its vibrant culture. She began marathon training with the intention of starting in New York. However, when she moved to Chicago two years later, she fell in love with the city and chose to run her first marathon in Chicago in 2002 at age 30.

Since then, she has completed over 20 marathons—including the Boston and New York City Marathons, in addition to several more Chicago Marathons. She credits running with helping her feel young, energized, focused and happy.

Now at age 45, her love of running is matched by her love of being of service to the running community. She has been a pacer for the Chicago Marathon since 2004, taking only 2 years off—in 2008 when she gave birth to her daughter, and last year when an injury kept her from pacing. She is happy to report she is fully recovered and back to pacing again this year. 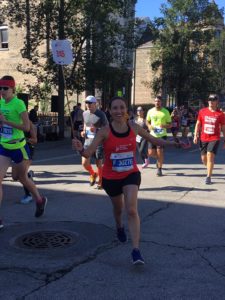 When Health IQ spoke to Jimena about her unique choice to become a pacer as well as a marathon runner, she had this to say:

“Being a pacer is a great way to give back to the community and to give back to runners—specifically runners that are just starting to run or who are preparing for their first marathon. Running a marathon at an even pace is not easy. We tend to go too fast in the beginning and that can ruin your marathon. So the satisfaction of doing something that helps so many runners is very rewarding. You help them finish at their specific goal time. And then so many people thank you because you helped them get to the end at an even pace and they achieve their dream of qualifying for the Boston Marathon.”

Thank you, Jimena, for showing us the power of living a health-conscious lifestyle. And now that you know what the Boston Marathon is, thank you for giving back to the running community so that others can follow in your footsteps and realize their dream of running in the Boston Marathon.