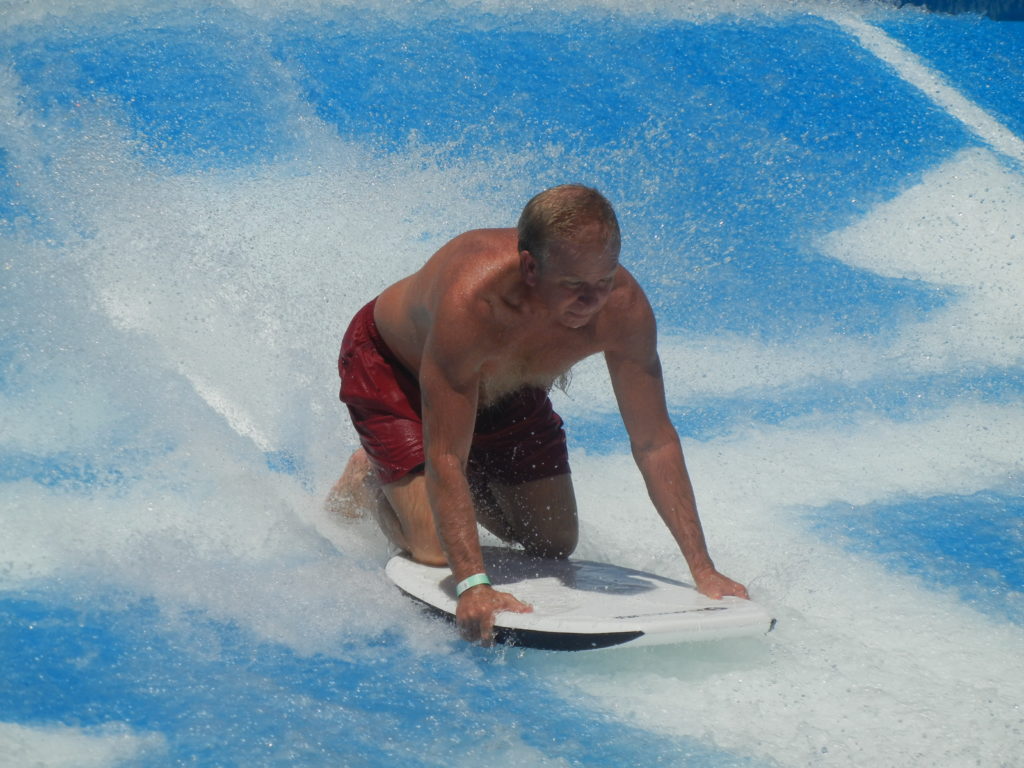 For Health Hero Reno Altschul, working out is non-negotiable. The 64-year-old Lexington, Kentucky resident simply does not give himself the option of slowing down. One will find Reno at the gym on Mondays, Wednesdays, and Saturdays lifting weights for an hour before riding 18-20 miles in a spin class. On Tuesdays and Thursdays, Reno competes in a full-court basketball league that includes people 30 years his junior. Fridays and Sundays are rest days—so the family knows to plan the weddings and birthday parties on those days!

One might wonder how Reno stays so motivated to workout. While he jokes that it’s simply because he’s a little obsessive compulsive about exercise, the truth is that he’s been cultivating inner discipline and commitment to personal mastery since he was a teenager back in Arkansas, where his stepfather used to say, “Don’t ever stop being healthy and active. As soon as you stop, you get old.” Taking that advice to heart, Reno began practicing martial arts—specifically Taiho Ryu. His commitment to Taiho Ryu continued through his move to Lexington—where he began college at the University of Kentucky—and well into his 20s. During that time, he competed in professional karate tournaments and was featured in several national martial arts magazines.

That discipline that Reno cultivated through Taiho Ryu served him well beyond the tournaments, as he worked hard at a department store to pay his way through college as well as support his young daughter. Though he was eventually offered a management position, he knew that retail was not the career for him. So he left that job in search of his next career. In the meantime, he continued to mail in premium payments for his health insurance to Maxicare—which was eventually acquired by Humana—but his health insurance kept getting cancelled each month.

He finally called Humana to complain and found out that company’s address had changed in the buyout—a detail of which Reno had not been informed. Humana asked if Reno had proof that he had been attempting to pay his premiums. Reno immediately went down to their office to share his meticulous documentation to back up his claim. The customer service rep was impressed with Reno’s bookkeeping and seizing the opportunity, Reno inquired if she had any job openings. This past January, Reno took early retirement after nearly 30 years with Humana.

It was through Humana that Reno first discovered Health IQ’s quizzes, which are offered to participants in Humana’s Go365 program though a partnership with Health IQ. When asked what he liked about them, Reno says, “You learn things from them. The funny thing is I would score well on things I thought I knew nothing about and I didn’t do as well on the ones I thought I knew everything about. It’s not a narrow field of knowledge.”

Health IQ’s quizzes continue to fuel Reno’s commitment to health consciousness. Reno is also inspired by his 3 kids—2 daughters and 1 son, who also live a health conscious lifestyle by running and playing basketball—as well as his wife, who overcame cancer and now strives to support others by sharing her story. And, of course, Reno continues to carry the lessons he learned from his years competing in martial arts to the basketball court as well as to the baseball diamond, where he is a little league coach.

Reno notes that his biggest takeaway from his martial arts practice directly applies to work as a coach. “My Taiho Ryu instructor from 20 years ago recently got in touch with me and I told him, ‘I’ve coached little league baseball here in my county for 6-8 years—both All-Star teams and Little League Championships. And the things that you’ve taught me in the martial arts—though they have nothing to do with baseball—are the same things I teach to these kids.’ Courtesy, respect, commitment, even down to the breathing—it all gets passed down. What is interesting in the martial arts is that people spend a lifetime practicing it. But you are taught all you need to know within a few years. So the challenge becomes, ‘What are you going to do with it?’ The rest of the time is spent perfecting what you already know.”

Reno’s commitment to mastery is what enables him to keep up with men half his age when playing basketball—including his 29-year-old son! Now Reno has set his sights on competing against his grandson—who is 11 now—when he is old enough to play in adult competitions. One of Reno’s basketball colleagues recently asked how Reno has the discipline to stay committed to his health. Reno’s answer was simple: “You don’t ever stop. You don’t let yourself fall into the trap of ‘Well, not today.’”

We at Health IQ share the same sentiment, Reno, and it’s inspiring Health Heroes like you that support our commitment to never stop celebrating the health conscious.

Premium Free Medicare Advantage Plans: Can I Actually Get a $0/Month Premium Plan?

Health Tips for Fall From Seasonal Eating to Fall Workouts

This Week’s What Do I Need To Know About……Recovering In A Hot Tub, Brown Bag Lunches, and Healthy Campfire Meals For Memorial Day