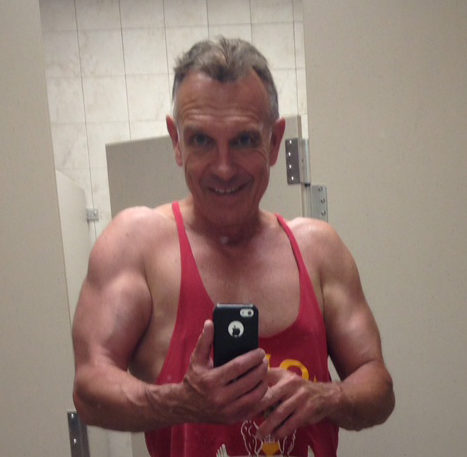 Ron Soldano is a man whose passion for bodybuilding and drive to serve others allows him to live life, as he says, “on full throttle.” The 64-year-old New Jersey native—and self-proclaimed “oldest teenager you’ll ever meet”—moved from his childhood home of Montvale in his mid-20s to begin his career in real estate in Ocean View. Ron chose to live in this seashore town because he loved the health conscious lifestyle that beach living offered. It was also in Ocean View where Ron began to get serious about bodybuilding—a sport to which he remains dedicated to this day. Twice a week, Ron is at the gym for 1.5 hours lifting weights. To improve his cardio fitness, Ron power walks on the beach 5 miles 2-3 times a week and does non-impact deep-water running for recovery and heart health.

To Ron, bodybuilding is more than just about looks—it is his art and inspiration. He loves sculpting his muscles and considers the human body to be the ultimate art form. He credits bodybuilding with providing him the mental space—and endorphins—to generate his most creative work ideas. While he’s still in the real estate business, he’s also found a fulfilling purpose in mentoring 20 & 30-year-olds on health consciousness and life skills. Surrounding himself with youthfulness helps keep Ron young at heart as he enjoys young people’s enthusiasm for life. Ron may be a self-proclaimed teenager, but he’s also a wise soul. He tells his mentees to dream big and urges them never to let anyone squash their dreams. As a part-time writer and radio host, Ron’s inspirational teachings are now reaching beyond the shores of Ocean View.

However, Ron’s journey to perpetual teenage-hood and inspirational guru wasn’t an easy one. When Ron was 11, he suffered a fall that permanently injured his back. His condition—spondylolisthesis, where one vertebra slips onto another—resulted in massive pain and restrictions in mobility that made it difficult for him to walk. But that didn’t stop Ron, whose parents always told him, “You might die trying, but you’re not quitting.” Throughout his teen years and early 20s, Ron studied kinesiology in lieu of invasive surgery so he could learn how to lift and move safely.

Ron was always an active young man, but he knew he would have to adjust his activity to accommodate his injury. Hard rotational sports such as golf, tennis, and hockey were off-limits. So at age 22, Ron joined a gym and started lifting weights. 1 year later Ron witnessed his father having a heart attack. Thankfully his father lived, but for Ron it was a wake-up call. The doctor told Ron since heart disease was in his family, Ron was also susceptible. He didn’t want his family history to become his own legacy, so Ron took nutrition courses and got serious about bodybuilding—becoming a competitive bodybuilder from the ages of 27-30.

At 30, Ron stopped competing in bodybuilding since some of the competition poses aggravated his back. So bodybuilding competitions morphed into long-distance cycling—sometimes over 100 miles in a day! After 12 years, Ron stopped cycling—also due to his back injury since being hunched over a bike exacerbated the pain. But that didn’t stop Ron. He finally discovered deep-water running, which he continues to do in addition to non-competition bodybuilding.

Then at age 58, Ron faced another difficult health challenge when he fell 12 feet from his roof and shattered his pelvis, broke a rib, and sustained a concussion. Ron recalls the ER doctor telling him that it was due to Ron’s impeccable physical health that the injury wasn’t as bad as it could have been. This only reinforced Ron’s commitment to his health and fitness. He abstained from pain medications and opted to work with an orthopedist—who told him it would be a year before Ron would return to the gym. However, 6 months later, Ron was back to lifting weights. When asked how Ron was able to recover in such a remarkably short amount of time, he says, “I stayed focused every day and remembered that each day I was more healed than the day before. I didn’t let the trauma of the fall overwhelm my mind. I stayed focused on my training and all the positive aspects of my life. And I kept telling myself ‘You’re not quitting.’ I’d spent too many years training my body to let this impact me in a negative way long-term.”

It’s been 5 years since Ron’s recovery and clearly this teenager hasn’t looked back. His goal is to continue to increase strength and he marvels how at 64 he still hasn’t plateaued on how much weight he can lift. Ron credits his emphasis on proper technique and strengthening stabilizer muscles for helping him lift heavier. He’s a slim and proportional 176 pounds with a size 46 sport coat and 30-inch waist. Ron also shares that his doctor was impressed with Ron’s recent heart tests, which indicate that the percentage of blood that Ron ejects with each pump, aka ejection fraction, is significantly higher than most people his age or younger—71% vs 50%! Ron focuses on eating clean, whole foods and avoiding processed protein powders and supplements. And true to his inner teenager, Ron recently purchased a competition off-road motorcycle, which fits in well with his “living life on full throttle” philosophy.

What’s Ron’s advice to anyone looking to stay forever young? “Find something you like to do. Do it consistently. As you age you will have to make adjustments. But don’t let age or injury detract or sway you from your goal. Avoid unnecessary surgeries if possible—there’s a long road to recovery and potential for scar tissue, which can hinder progress. Keep a level head and stay focused.”

In addition to his sage advice, Ron is a huge fan of Health IQ’s quizzes and recommends them to his friends, mentees, and anyone who will listen. “I share Health IQ quizzes with other people. I say ‘Listen: log in, sign up, whatever you have to do—take the quiz. This is good, salient information for anyone who is interested in their own personal health.’ I look forward to taking them every morning. They provide a lot of great technical information—a lot of which I didn’t know but I’m learning as I go forward!”

We at Health IQ share your sentiments, Ron, and are also committed to never give up on our dreams, never stop learning, and never let anything stand in the way of living a health conscious life. Thanks for being a shining example of an “everlasting teenager” Health Hero. Oh, and can we get a ride on that motorcycle sometime?

Do I Have to Sign Up for Medicare if I Already Have Health Insurance?

This Week’s What Do I Need To Know About……Patriotic Workouts, Avoiding Tech Neck, And Healthier Picnics.

Financial Stress and Mental Health: Tips for Moving Past the Fear

Do I Need Medicare Supplement Insurance? Why the Benefits Usually Outweigh the Cost