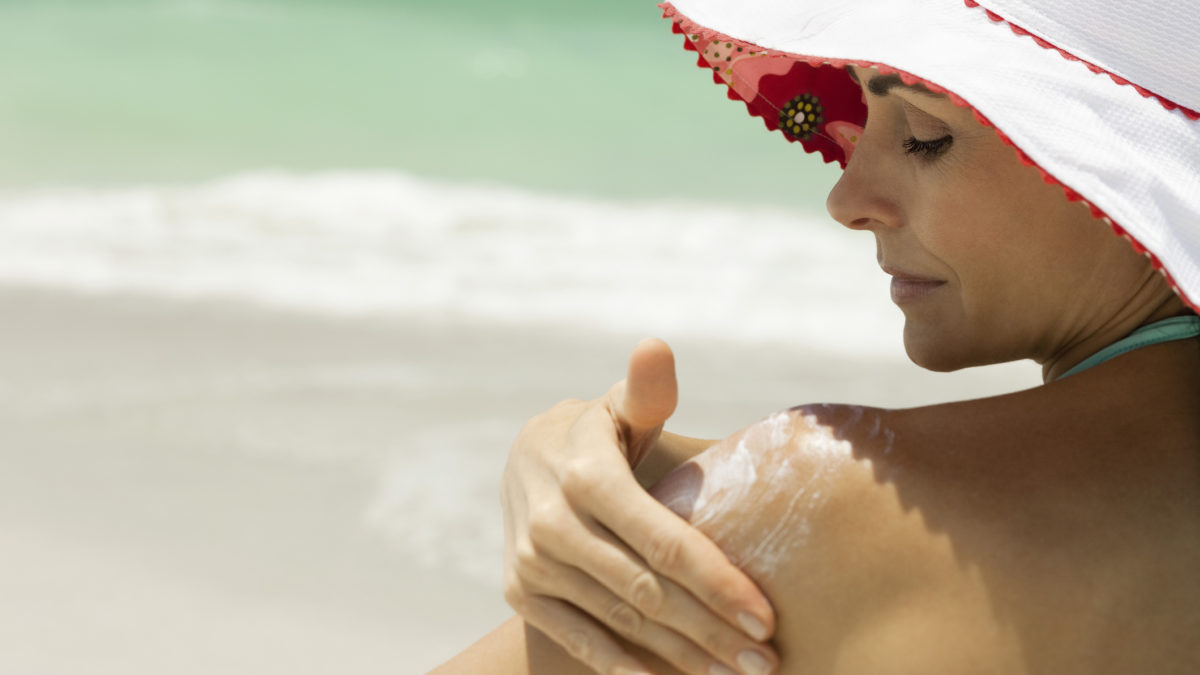 July is UV Damage Awareness Month, and while celebrating outdoors this summer, it’s especially important to protect yourself from skin cancer from overexposure to the sun. Most people know the importance of sunscreen, staying inside during peak hours, and wearing hats and clothing to protect exposed skin during the hottest hours of the day. However, even with this knowledge, many people don’t take proper precautions or know how to recognize a potentially dangerous marker of skin cancer.

Experts recommend applying a teaspoon of sunscreen per body area such as the face, chest, shoulders, or one leg. Make sure sunscreen has not been sitting in heat such as the interior of a car for too long and always check expiration dates as sunscreen goes bad after about 3 years even if stored perfectly.

Sunscreen is an important component of sun safety, but it’s also important to wear sunglasses to protect eyes since eyes can become sunburned which can lead to cancerous ocular melanomas—skin cancer on the eye—as well. Buying sunglasses that read “100% UV protection” to wear during peak hours of sun—usually about 10am to 3pm depending on season and location—is the best way to keep eyes safe. Experts advise using sunglasses large enough to protect from rays that reflect off sides of eyes or from below—since UV radiation reflected from water on the ocean or lake can also cause burns..

Marks or moles one doesn’t remember seeing before are considered suspicious for skin cancer, as are ones with unusual itchiness or tenderness with no other obvious causes.

There are now apps on your phone such as Miiskin, UMSkinCheck, Molescape and Skinvision, which use photographs of moles blown up to a larger size to detect suspicious lesions that can be missed with the naked eye. Some apps will also send photographs to dermatologists for analysis if they’re suspicious.

Studies of this technology find that the ones that send photographs to dermatologists are the most accurate. However, the ones that analyze skin using AI are beginning to show more promise. Studies still indicate it’s best to check with a doctor if one isn’t sure as skin cancer apps are relatively new technology.

The best way to do a self-check of suspicious marks or moles on the skin is to use the ABCDE check—which applies to melanomas, the most deadly type of skin cancer. The ABCDE check stands for asymmetry, border, color, diameter, and evolving. .

In general, an asymmetrical mole is more suspicious than a perfectly circular one. Some researchers recommend following the “ugly duckling rule”—if one mole on the body stands out as distinct from all others, it can be considered suspicious.

Most melanomas have uneven or blotchy borders.

Uneven color across the mark is also suspicious as most birthmarks or moles will be a consistent color.

Most melanomas will be larger than ¼ inch in diameter which is roughly the size of a pencil eraser—although they can be smaller than this.

One of the biggest red flags for UV damage is a mole or mark that is changing in size over time. So a mark that meets one of the other criteria should be observed carefully for changes in any of these qualities, especially a change in size.

Basal cell carcinomas are much less dangerous than melanomas and are more likely to be treatable, but it’s still important to check for them as they require treatment to prevent the tumor from growing. They tend to appear as patchy raised red or pink skin, or yellow/pale areas that look like scars.

Basal cell carcinomas sometimes take the form of open sores and ooze blood or liquid, and often go away and come back.

What To Do If A Suspicious Mark Is Found

If any of these criteria are met, especially for a mark or mole one doesn’t remember having before, checking in with a dermatologist is recommended. Measuring and keeping track of the exact size of the suspicious mole, mark or lesion over time can also help the doctor reach a diagnosis.

For more tips on safety for UV damage awareness month, check out our quiz on how to choose the best sunscreen.

6 Types of Exercises That Can Lower Life Insurance Rates

Fasting Diet: Find Out How When You Eat Affects Your Metabolism