Turmeric comes from the root of the Curcuma longa plant, and has been used for centuries in ancient Chinese and Indian systems of medicine. This slightly bitter tasting plant has been extensively studied for its myriad of health benefits, and is used in both food and supplement form.

Curcumin, the primary pharmacological component of turmeric, is an impressively effective nutritional supplement in the treatment and prevention of many conditions, with chronic inflammation topping the list.

One key component that not everyone with an interest in its benefits is aware of, is that turmeric is fat-soluble, meaning it must be consumed with a fat in order to be effectively absorbed and assimilated. For that reason, consuming turmeric with milk is an excellent way to include this incredible superfood in your diet.

Traditionally, turmeric milk was known as golden milk, for its vibrant yellow/orange color. But before we talk more about how to prepare this particular beverage, let’s take a closer look at some of the many medicinal properties of turmeric.

Inflammation has become somewhat of a buzzword these days, and for good reason. However, we must understand that when we talk about inflammation as the root of many health problems, we are not talking about acute inflammation, which is natural and necessary to fight pathogens and repair damage in the body. Instead, we are specifically targeting systemic, generalized inflammation, which is internal and can manifest into multiple symptoms and degenerative conditions.

Curcumin is an incredibly powerful antioxidant, which is key for fighting free radicals in the body. Free radicals are atoms with one unpaired electron that is highly reactive, and in humans can damage cells and contribute to degenerative disease. These molecules can form in various ways, such as a diet high in toxins and rancid fats (such as canola oil and hydrogenated/partially hydrogenated oils), and damage our cells and DNA. Free radical molecules also play a major role in cancer formation. Antioxidants are essential in their ability to fight and protect our body from dangerous free radical damage.

Brain-Derived Neurotrophic Factor (BDNF) is a growth hormone that functions in the brain to support neurons in forming new connections and multiplying. Many brain disorders and diseases (particularly Alzheimer’s disease) have been connected to low levels of BDNF.

Curcumin has been shown to actually increase levels of BDNF. Therefore, research has been done into its potential role in the treatment of Alzheimer’s, although further studies are needed.

Studies have shown that turmeric’s active ingredient, curcumin, has the capacity to communicate directly with genes in the liver cells, directing them to create more LDL receptors, thus clearing more LDL (bad) cholesterol from the body. According to the American Heart Association, LDL cholesterol is considered “bad” because it contributes to plaque build-up and the hardening of the arteries, a condition known as atherosclerosis.

Cancer is defined as an uncontrollable growth of cells, largely influenced by free radicals, as described above. Due to its powerful antioxidant capacity, curcumin has been studied in the prevention and treatment of various types of cancer, especially breast, prostate, lung and colon cancers. Additionally, it is thought to reduce the risk of leukemia in children.

Multiple studies prove turmeric’s effectiveness in not only reducing cancer cell growth and proliferation but also working to prevent cancers from forming in the first place and preventing metastasis (spreading of cancer cells to other parts of the body).

6.Relief from symptoms of arthritis

Due to its impressive abilities to cool inflammation alongside its antioxidant effects, clinical studies have shown that curcumin can be extremely effective in neutralizing the free radicals largely responsible for the pain and damage caused by rheumatoid arthritis. In fact, studies have shown that patients suffering from this condition experience significant improvements in swelling, morning stiffness and the duration of time they are able to walk comfortably. 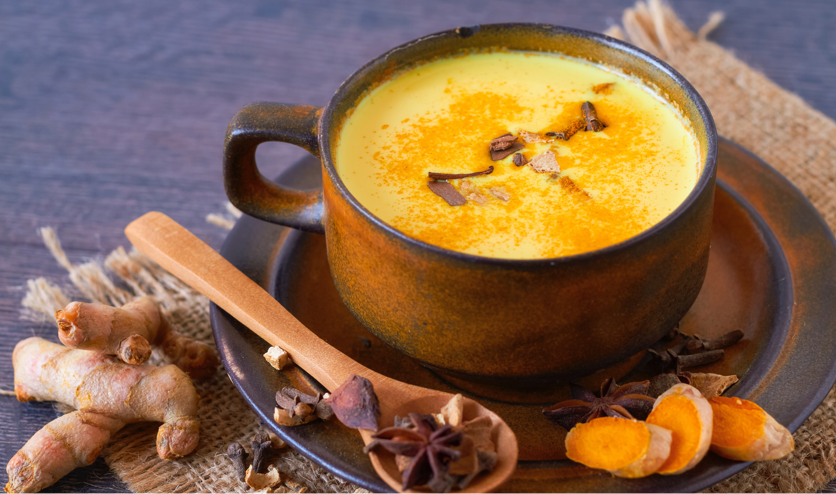 Why Turmeric With Milk?

Because turmeric is fat-soluble, it must be consumed with a fat in order for the body to best assimilate and benefit from its many medicinal properties. High-quality milk can be quite nutritious for those who are not dairy sensitive, and is one way that turmeric has traditionally been prepared.

However, for the best health benefits, use the best-quality whole milk you can find. Choose organic animal products whenever possible. Due to a diet of grains versus grass, commercial milk has been shown to potentially skew our omega 3:omega 6 fatty acid ratio, thus causing further inflammation.

If you are one of the many people sensitive to milk and dairy, unsweetened coconut or almond milk are excellent alternatives.

How to Prepare Turmeric Milk:

One interesting tidbit you might not know is that the key chemical found in black pepper, piperine, enhances the bioavailability of turmeric, so adding a dash of black pepper to your turmeric milk provides an extra nutritional boost.

By incorporating turmeric milk into your regular diet, you will reap the many healing benefits it has to offer, including decreased inflammation, disease and cancer prevention, better liver function, and more. Not to mention, this traditional, medicinal beverage tastes delicious. Your body will surely thank you.