We’ve curated the best fitness, nutrition and health news backed by data and science over the last week. We’ll share brief highlights every Monday. Signup to get news delivered straight to your inbox: 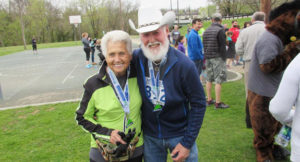 Margaret and J.R. Vaughn, who are both 80, met on the dance floor in 2012 at a local dance place in Columbia, Tennessee. This was shortly after Margaret had just completed a half-marathon. Married in 2013, the two have how completed at least 30 races together which range from 5ks to half-marathons. What’s even more inspiring, they run the races hand-in-hand the entire time making sure they cross the finish line together.

A running study co-authored by Dr. Duck-chul Lee, a professor of kinesiology at Iowa State University, showed that running reduces all-cause and cardiovascular mortality. Dr. Lee’s new follow-up study published last month in Progress in Cardiovascular Disease is titled “Running as a Key Lifestyle Medicine for Longevity” which showed that an hour of running can extend a runner’s life expectancy by seven hours. We think that’s cause for celebration!

Cycling to Work May Reduce Risk of Premature Death

Can Endurance Exercise and Gut Bacteria Help Each Other?

A study on the microbiome and exercise published in the Journal of Sport and Health Science and funded by the Shanghai University of Sport analyzed how gut microbiota positively affect and also respond to exercise. Gut bacteria play a role in the body’s ability to extract energy from one’s diet as well as the body’s ability to control and recover from inflammation and maintain proper hydration, important factors in maintaining a well-balanced endurance exercise program.

For another article on the gut microbiome and endurance athletes, read this.

With the direct sun bearing down on the Boston Marathon’s course, many runners felt the heat of the race make running uncomfortable and for some, unbearable. Julianne Bowe, 29, felt her legs cramp and give out in the last leg of the race, but not before several fellow racers helped her across the finish line. Another runner was swept up in the arms of runners and soldiers to be guided across the finish safely. Colette Longstaffe of Great Britain was assisted by two US soldiers in the last 100 yards of the marathon. Perhaps the most inspiring was Earl Granville, a wounded vet, who picked his guide up and carried her over his shoulders until the end of the race.

Planning a run today? Here’s a couple of tips to keep you safe!

Yoga To The Rescue!

New research suggests that yoga may help men deal with the side of effects of prostate cancer therapy. Patients in the study who attended yoga classes had less fatigue and better sexual and urinary function than those who did not.

Get fitness news and updates weekly

Do I Need Life Insurance? Myths, Facts, and The Top Seven Reasons to Buy

Do I Need Life Insurance? Myths, Facts, and The Top Seven Reasons to Buy

Can I Keep My Family on Medicare or Bundle My Medicare With My Partner?

Switching Up Your Running Routine—How to Stay One Step Ahead