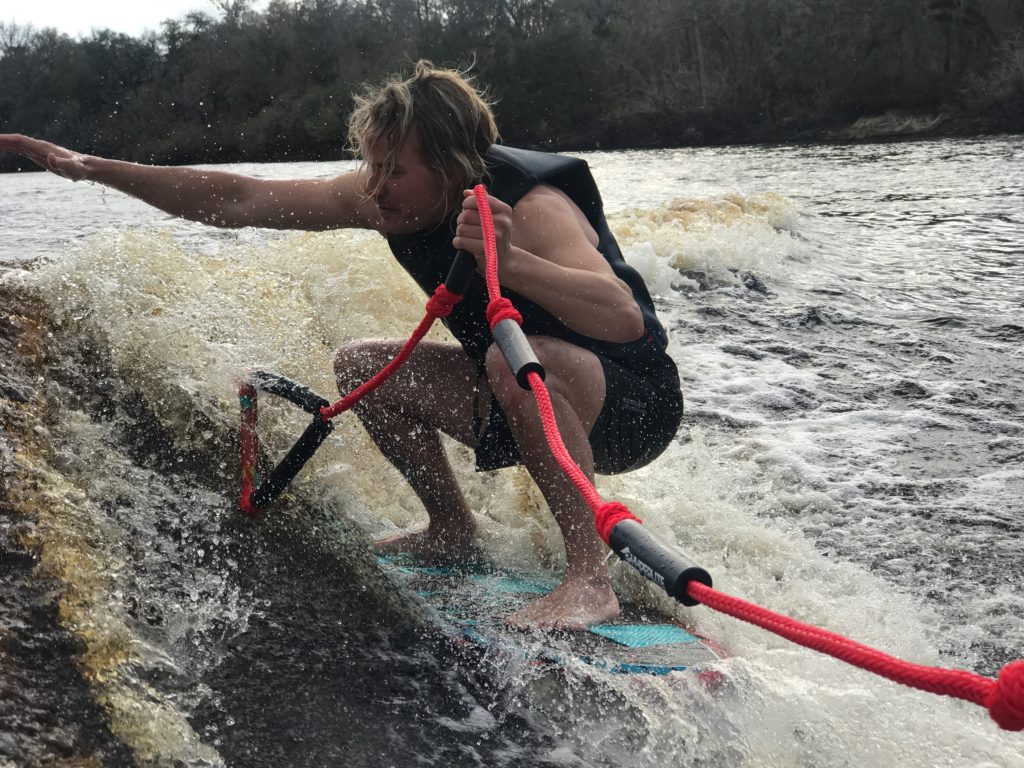 When it comes to busting through mental obstacles, Rob Stewart’s “No Excuses” approach has helped him gain big in the weight room. In fact, the 37-year-old Lake City, FL resident is now on track to lift a cumulative 1000 lbs—a 350lb squat, a 400lb deadlift, and a 250lb bench press—in the next year. While those who know Rob these days wouldn’t be surprised, his friends and colleagues from his younger years might not recognize Rob—even if they passed him at a grocery store (this really happened)! That’s because Rob was known as a “sickly” and “geeky” kid who couldn’t gain weight.

Growing up, Rob played typical outdoor games with neighborhood kids—frisbee, soccer, softball—but he never participated in structured exercise or sports. Rob’s parents also didn’t prioritize exercise in their daily routines. However at age 13, Rob decided he wanted to try lifting weights—a desire partially inspired by his father’s promise to buy him a new stereo if he gained 10 pounds. One year later……..Rob had failed in his attempts to gain weight—a pattern that plagued Rob all through his teens, 20s, and early 30s.

Then a few years ago, a friend of Rob’s died of breast cancer, and a colleague was diagnosed with the same disease. The thought of getting sick and dying young scared Rob. Around the same time, Rob took notice of his father’s chronic knee and back pain—and noted that his younger brother also suffered the same ailments. Then Rob threw out his own back while trying to lift a piano and injured his knee while playing soccer—which resulted in pain so bad, he couldn’t sleep. His friends’ sickness, his family history, and his own injuries were the wake-up call Rob needed to get healthy. He decided to get rid of any excuses that prevented him from being in the best shape of his life.

He challenged the excuses that held him back from achieving his goals:
-I don’t have the time to workout
-I can’t eat right
-I can’t gain muscle because I’ve got a runner’s body
-I can’t lift heavy because of my back and knees

Rob’s first step was to hire a trainer and physical therapist. Rob discovered the importance of balancing strength in both agonists and antagonists. For example, his quads were strong, but his hamstring strength was virtually non-existent. In fact, his entire posterior chain was weak—so it was no wonder he was getting injured. Rob also learned the value of lateral movements, which helped him restore the strength in his knees. When Rob first went to the therapist, he couldn’t stand on one leg for 30 seconds. Rob was astonished that he couldn’t accomplish something so simple. He didn’t want to end up being “that guy” in 10 years who barely moved away from the television—a sentiment that sharpened his “no excuses” attitude. After working with the trainer on strength exercises and as well as learning from him how to balance macronutrients such as protein, Rob gained 20 pounds in only 6 months. More than just looking better, Rob discovered he had more energy and slept more soundly than he had his whole life.

2 years into his lifestyle change, Rob’s back and knee pain is gone, and he has maintained the weight gain. He still lifts weights regularly using the JEFit app. Initially he used it to track his progress, but he eventually hired a trainer through the app who evaluated Rob’s form through recorded videos. Rob’s routine typically includes squats/lunges on Mondays, chest exercises on Tuesdays, rest on Wednesdays, posterior chain exercises like deadlifts on Thursdays, and shoulder exercises on Fridays.

Rob admits his work schedule—in addition to being a husband and father—sometimes makes it difficult to get to the gym. But true to his “no excuses” mantra, he doesn’t let missing a workout or two get in the way of his long-term success. For him, fitness is now a way of life. Plus, his wife—who has always been a fitness fanatic—inspires Rob to keep going now that he finally “gets” the benefits of health conscious living. He’s now hoping to run an 8-mile Spartan race (his third) with his wife, while his young daughter does the Spartan half-mile run.

In addition to Rob’s commitment to diet and exercise, Rob always enjoys learning about the latest in health and fitness research—which is what draws him to Health IQ’s daily quizzes. “To me knowledge is a huge part of getting healthy. If you don’t know what’s wrong, you can’t fix it. I see so many people who eat unhealthy and don’t know it. That makes me go ‘Well what I am doing that I don’t know about?’ So I take the quizzes and learn about the risk factors for diseases that I think don’t concern me—like diabetes. I also enjoy learning about whether it’s better to stretch before or after exercise—because, frankly, I had never stretched as part of an exercise routine before! The quizzes raise my health conscious awareness.”

We at Health IQ agree, Rob, that choosing a health conscious lifestyle takes hard work. But it’s clear once we begin reaping the benefits of health conscious living, we eventually start looking for excuses to hit the gym! Thanks for inspiring us by your example, Rob.

6 Types of Exercises That Can Lower Life Insurance Rates

Being Grateful: How Feeling Gratitude Can Boost Your Mental Health

This Week’s What Do I Need To Know About……Working Out In Less Time, The Health Benefits Of Chocolate, And How Love Keeps You Young At Heart