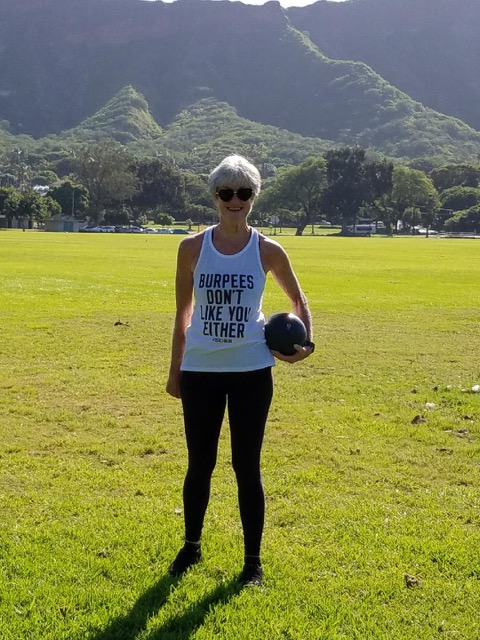 Sandy Gottesman is not your typical 70-year-old. When the Honolulu resident isn’t hiking or running the trails of her beautiful Hawaiian city, she can be found climbing the stairs every hour to ensure that she gets her 13,000—yes, 13,000—steps on her Fitbit. Or you’ll find her in a park or a pool teaching other seniors how to stand on one leg, bend forward and do a bicep curl—all at once.

Anyone who knows Sandy or has spoken to her can testify that she is a force of nature that can inspire anyone to achieve his or her “unreachable” fitness goals.

While Sandy was always athletic—her dad was a PE teacher and she considered it as a career before focusing on jewelry sales—it wasn’t until her husband fell ill in 1999 that she became dedicated to fitness. Over the following years, Sandy’s husband developed a slew of health conditions including diabetes, neuropathy, cardiovascular disease, stroke, kidney failure and COPD. Sandy dedicated much of her time to researching the best foods and workout routines for him and she says his doctors credit her with giving him twelve extra years of life.

During those difficult years, fitness became Sandy’s lifeline. The endorphins helped her stay energized while caring for her husband. In fact, the year her husband initially fell ill, Sandy ran her first marathon at age 52 and ran one marathon per year for nine consecutive years. She also became a personal trainer. But she discovered that there wasn’t much programming for people in her age group. After some research, she found a program run by Kaiser Permanente called “Silver & Fit,” which focuses on strength and cardio for seniors.

Initially, Silver & Fit started out with 2 levels: Stage 1 was for non-ambulatory exercisers and Stage 2 was for ambulatory exercisers. However, Sandy’s class became so fit and healthy, Kaiser had to add a third even more advanced stage to keep up with her students’ increasing fitness levels. Sandy’s 60-70 year olds were exercising like 30-year-olds.

Now teaching fitness is a part of Sandy’s everyday life. For her, it goes way beyond health to the very core of why she is here on this planet. She gets so much satisfaction out of seeing her senior students do things that they thought were impossible. For example, she has an 87- year old who could barely stand on one foot. Now, Sandy’s student can balance on one leg and bend forward into an airplane while doing a lateral raise (bringing extended arms out to side in line with shoulders).

When the local gym where Sandy was teaching went bankrupt, that didn’t stop Sandy. She just took her Silver & Fit class to the park, where she leads her students in 30 minutes of aerobics followed by 30 minutes of balance/core exercises as well as strength training with stretch bands and free weights. In addition to leading Silver & Fit classes three times a week, Sandy spends several hours a week in the pool leading her students in swim-based exercises.

Sandy says about teaching, ”I’m not in it for the money. This is not a money thing. I’m going to meet my maker sooner rather than later and I want to be able to say ‘I helped people.’”

When she’s not helping others reach their exercise goals, Sandy is pushing her own fitness limits. She’s participated several times in the Great Aloha Run—an 8-mile run along the Honolulu coast—and recently came in 7th in her age group amongst 200 people.

Sandy’s sharp memory and thirst for new health information is what attracted her to Health IQ—a company that has spent years gathering science and data to convince life insurance carriers that health conscious people deserve lower rates due to their lower risk of conditions such as cancer, heart disease and diabetes. The hallmark of the Health IQ brand is its research-based quizzes, which Sandy diligently takes every day.

“I love learning new things every day. The quizzes are fun and informative. I’ve learned a lot about nutrition that I can pass on to my students. I love the quizzes because I’ve always got somebody who’s got a health problem and then a quiz will pop up, i.e. what to do for a bad back or what to for cramping. And I’m like “Wow! How did you know?”

Thank you Sandy for your inspired leadership in the senior community. It’s people like you that motivate us to come to work each day.

Fast facts:
· Secured $7 Billion in coverage
· Underwriting time is 35% Faster Than Competitors and 70% of their health conscious clients get the top rate class
· Partners with the nations top rated Carriers
· Licensed in all 50 states
· Custom tailored services with the top team in the industry
· 9.6 customer satisfaction rating on TrustPilot
· Featured on Forbes, CNBC, TechCrunch, etc.

Life Insurance and Divorce – What You Should Know

Which Life Insurance Payout Structure Is Right For You And Your Financial Needs?

How Many Cows Did It Take?