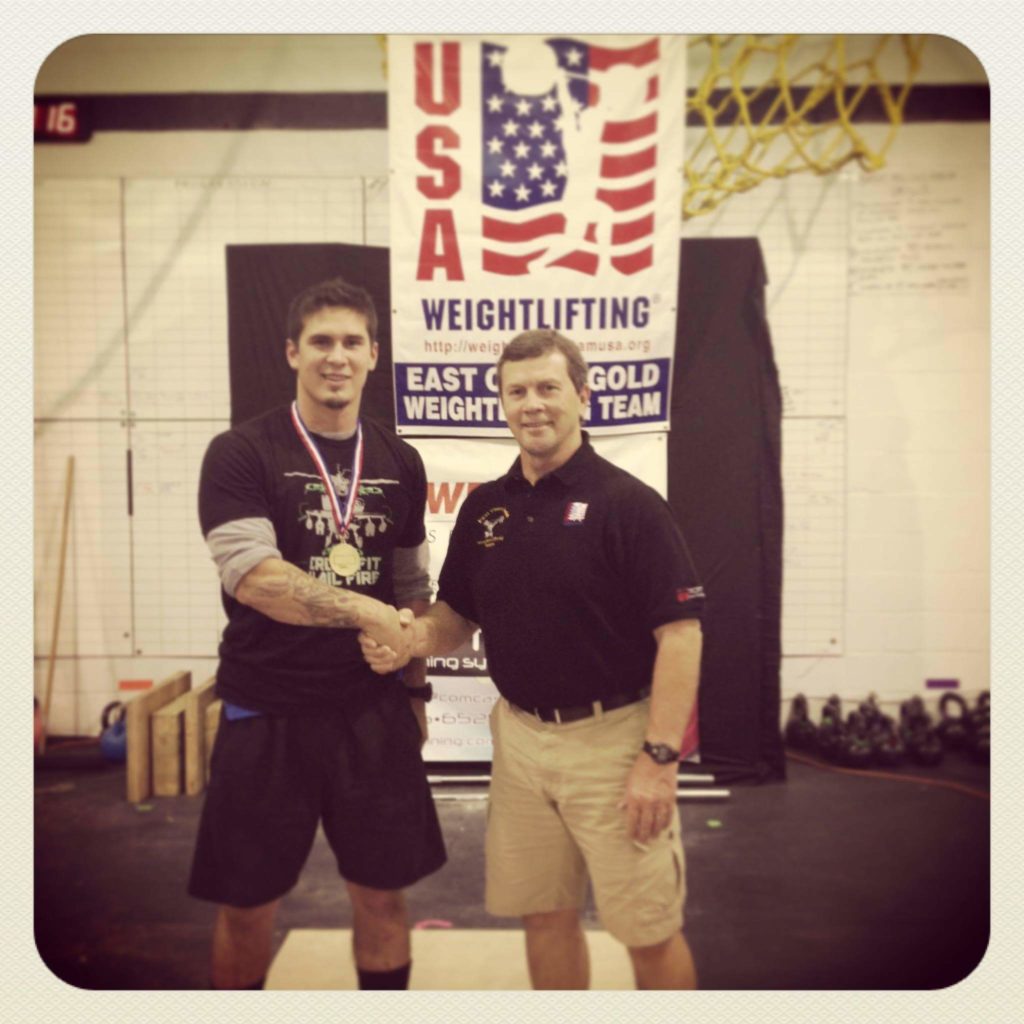 Mitchell Stokes—a member of USA Weightlifting since 2013—is no stranger to fitness. In his teens he participated in endurance sports such as cross-country and swimming—a choice he made after 9/11 so he could be physically prepared to enter the navy. He left the military at age 21, but it wasn’t until he caught the CrossFit bug at 23 that he started to realize he might need more than endurance—he would some serious strength to handle those CrossFit WODs, a.k.a. Workouts of the Day. Three years later he turned to Olympic weightlifting to help him tackle WODs such as “Isabel”—which requires significant snatch skills. The problem was there were no weightlifting coaches in his rural hometown of Orwigsburg, PA (population 3000)—where he had returned to open his own CrossFit gym.

Mr. Stokes, now 31, recalls his initial experiences when trying to learn weightlifting. “I never realized how weak I was. I couldn’t squat very much. Didn’t have very strong legs. I had a poor attitude as far as general strength training, i.e. ‘I don’t need to train legs. I don’t need to squat because I run all the time.’ But then when I started doing doing local Crossfit competitions, I realized, ‘OK. I have a problem. I’ve got a weakness I need to address.’ So I started teaching myself the Snatch and the Clean & Jerk. I took a couple of seminars. I got on a strength program. I continued to seek help from outside. We don’t really have weightlifting coaches around here. At least we didn’t. So I had to go outside the area and seek out a coach and basically learn as much as I could from a distance.”

Now that he was hooked on weightlifting, Mr. Stokes began participating in local competitions. In one particular meet, he and his younger brother Tony, also a weightlifter, went head-to-head. “I had almost no time to prepare because of we had recently moved the gym and restructured the business. My brother convinced me to do it anyway. I came in and missed my opening snatch at 100kg—made at the second attempt—then went and jumped 10kg to 110kg to make an attempt to beat my brother out. I made that lift and we both egged each other on for Clean and Jerk to ‘go big or go home.’ I made a 12kg jump from 125kg and I stood up a 137kg Clean, which was my biggest at the time. I didn’t make the jerk but I still out-totaled everyone. It taught me that regardless of how much training we put in, the mind is extremely powerful and can overcome major obstacles.”

When training just wasn’t enough, Mr. Stokes decided to seek out a USA Weightlifting Coaching Certification. He figured if he wanted weightlifting coaches in his hometown, perhaps it should start with him. “I started coaching young kids with my brother in the gym. After about a year, I had a number of youth athletes unexpectedly qualify for youth nationals, and the club has blown up since then. At Youth Nationals this past summer we walked away with so many medals I lost count. I couldn’t have been prouder of the effort and grit those kids showed this year. ”

Since having a daughter in 2014, Mr. Stokes has “hung up his competitive hat” —for now. But he still lifts regularly. “Right now my best Snatch is 118 kilos. My best Clean & Jerk is 135 kilos. And I went from a squat of probably less than 300 pounds to 400 pounds. I feel very capable. I don’t feel like I’m underpowered. I don’t doubt myself when I come up to the barbell or an Atlas Stone or a kettlebell.”

Both his hectic coaching schedule as well as his desire to take care of his daughter contributed to his initial choice to seek out life insurance. That’s when he turned to Health IQ.

Health IQ interviewed Mr. Stokes about his motivation for buying life insurance and why he chose Health IQ.

Health IQ: What made you consider getting life insurance?

Mitchell Stokes: My child had just turned 3 and I had recently done a lot of traveling. Every year I go to Youth Nationals, which was in Atlanta this year. I also went down to the Virgin Islands. I had been spending a lot of time on planes and the thought occurred to me, “If something happened to me, what happens to my child?” I want to make sure that she has a good future. And the biggest takeaway for a gym owner, coach, or athlete that’s active is you don’t ever know what’s going to happen to you. You could have a heart condition you don’t know about. I’ve had numerous friends pass away from freak accidents, cancer, and unknown heart issues over the last 10 years. It’s made me very aware of my mortality. You just don’t know what’s going to happen and if you don’t have those safeguards in place for your family, you’re really doing them a disservice.

Health IQ: What had you choose Health IQ for life insurance?

MS: I was on Instagram and came across the ad multiple times before I decided to click on it. And honestly the process was one of the simplest things I’ve ever done. Within less than a day—it might have been hours—Dan Upton called me. Dan really helped me out because I had never purchased life insurance before. On the phone he made it simple explaining the different ins-and-outs. Before I knew it I had an appointment to get my physical and blood work done. The quizzes I had to take were straightforward and within 1-2 months I had coverage.

Health IQ: Would you recommend Health IQ to other weightlifters?

MS: Absolutely. It’s a no-brainer. It was really simple to get set up. Very reasonable rates. I felt like when I was talking to Dan on the phone he understood my needs and concerns and took care of them for me.

Want to learn more about how Health IQ can help weightlifters save on life insurance? Take our quiz and find out how your body type affects your premiums.

This Week’s What Do I Need to Know About……Workout Timing, Espresso Hits, and Post-Meal Walks

Snacks After Workout: What’s the Best Snack After Exercising?

Sticking to a Budget: Discovering Your Best Budgeting Style

5 Ways a Vegan Diet Can Save Your Life