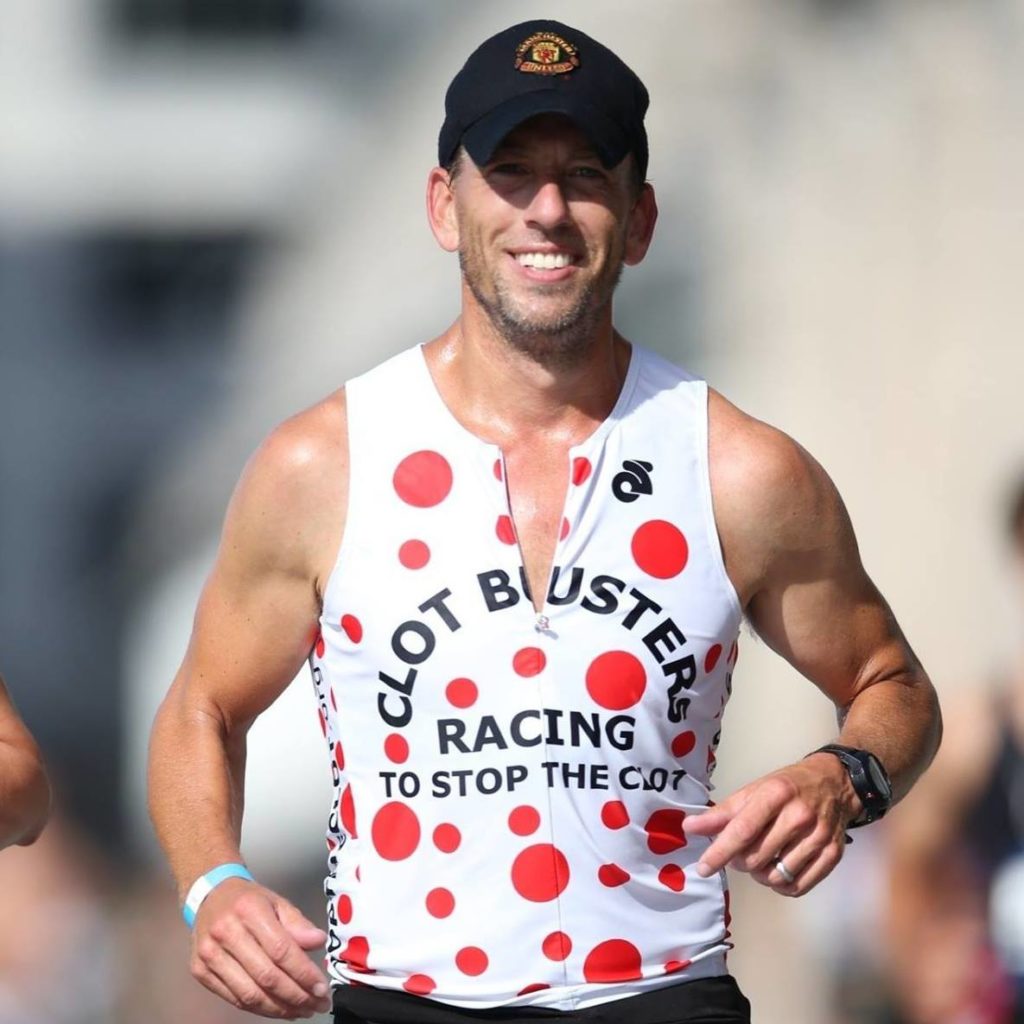 In 2011, when Eric O’Connor was hospitalized at 32 for deadly blood clots (pulmonary embolisms and deep vein thrombosis), his doctor called him “The Healthiest Sick Guy I Know.” That’s because, according to the ER surgeons, Eric survived thanks to his commitment to health conscious living and his love of marathon running.

Today at 39, Eric’s doctor now says he doesn’t expect to see him in the hospital again, since Eric’s determination to exceed his fitness potential drives him to workout on a near daily basis. For years, Eric was a dedicated runner, sometimes running up to 3 marathons a year. After Eric’s battle with blood clots, he turned his attention to longer, slower ultra-marathons—some over 50 miles long. These days, Eric is incorporating strength training—specifically CrossFit—into his running workouts, which has helped him pack on 25 pounds of muscle.

In order to educate people about the signs and symptoms of blood clots and “Stop The Clot,” Eric performs annual running challenges that raise money for the National Blood Clot Alliance, where he is a board member. This Memorial Day weekend, Eric hopes to break a world record: running 31 miles in under 8 hours while wearing a 20-pound weight vest. Eric will perform the challenge by running 250 laps around the parking lot of his local Chicago CrossFit gym. Other CrossFitters are encouraged to join the challenge, especially if they are doing the “Murph” workout: a mile-long run with a weighted vest, 100 pullups, 200 pushups, 300 bodyweight squats, and a second mile-long run with a weighted vest.

2011 wasn’t the only time Eric found he was “running for his life.” When Eric was 23 he had a relapse of Hepatitis C—which he’d contracted as a teenager—and he could barely walk up a flight of stairs. Eric recalls all he could think about both times he was hospitalized was, “No, seriously, when can I run?”

Eric’s love of fitness challenges and his dedication to educating the masses about the risk of blood clots are seconded only by his commitment to his wife and 3 sons. That’s why Eric purchased special rate life insurance with Health IQ. Health IQ recognizes that one’s medical history doesn’t tell the whole story, and those with well-managed conditions should be financially rewarded for their hard work. Now Eric can rest assured that his family will be protected, should the unexpected happen.

When asked about Health IQ, Eric says, “The experience of getting life insurance with Health IQ was great. I haven’t needed it and I don’t plan on needing it! But I know it’s there. And when I do events like my Memorial Day run—not that I’m at risk, but who knows—I always feel good knowing that it’s there.”

We at Health IQ will be cheering you on this Memorial Day weekend, Eric, to celebrate both your commitment to health conscious living and your dedication to helping others “Stop the Clot.”

Announcing The Health Literacy In The 50 States Report