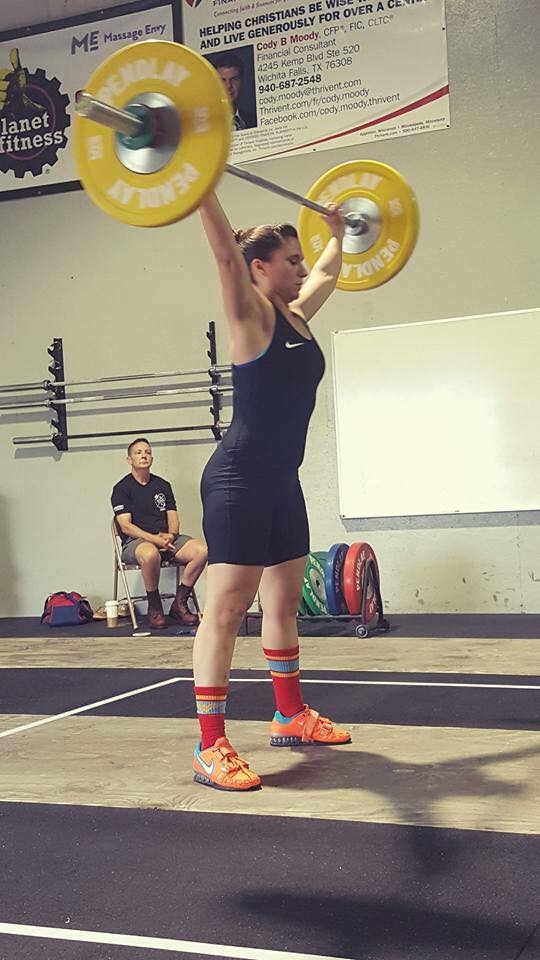 Sherrie Nymeyer is a modern day Wonder Woman. The 35-year-old New Mexico resident loves rock climbing, mountaineering, and Olympic weightlifting—which she does at least 5 times a week. When she’s not training in the gym or working at her engineering job with the U.S. Air Force, one can find Sherrie competing at a USA Weightlifting meet or Crossfit competition.

It’s no secret that Sherrie has the grit and mettle to face some strenuous physical challenges. However, she didn’t always feel as confident to tackle these kinds of athletic goals. Although she enjoyed running in her 20s, she found that her lack of a well-balanced workout regimen left her with a lot of hip and joint pain as well as with an underdeveloped sense of coordination. She began to feel old as she approached 30—a feeling that was highlighted after a few of her acquaintances and colleagues passed away usually at a very young age. Sherrie wanted to retain as much strength and independence as she aged, so she started looking into weight training regimens and began tracking her protein, fat and carbs on a daily basis.

Five years later, Sherrie’s growing passion for Olympic weightlifting has allowed her to lift more than 1x her own bodyweight. Her current snatch weight is 53kg and her current clean & jerk is 73kg. She has competed in 3 amateur competitions and taken 2nd place in 2 of them—one being a USA Weightlifting sanctioned meet and the other a local competition. Thanks to Sherrie’s self-proclaimed “stubborn willpower” and self-confidence, she has set her sights on setting a lifting record in her state of New Mexico. In addition she wants to start competing in one weight class lower. Seeing her colleagues push past their fear of failure inspires her to do the same. As a result, she’s now in better shape than she ever was in her 20s.

While Sherrie’s athletic goals inspire her to keep training, it was her daughter that motivated her to consider getting life insurance. For a long time, Sherrie thought she was too young to worry about dying. But after hearing an ad on the Weightlifting Life Podcast, Sherrie decided to give Health IQ a try. She found the process to be easy and straightforward. She also appreciated that Health IQ rewarded her healthy lifestyle rather than penalized her for health conscious activities such as rock climbing and mountaineering that other insurance carriers would deem “risky.”

Sherrie can relax now and enjoy her active lifestyle knowing that her daughter is protected should the unexpected happen. We at Health IQ know how much hard work it takes to be health conscious and we applaud you, Sherrie, for your unwavering determination to succeed and for setting a “Wonder Woman” example for your daughter, your colleagues, and everyone you meet.

Coffee Won’t Give You Cancer But Hot Drinks May

Social Distancing: What Keeps You COVID-Safe in Public Spaces?