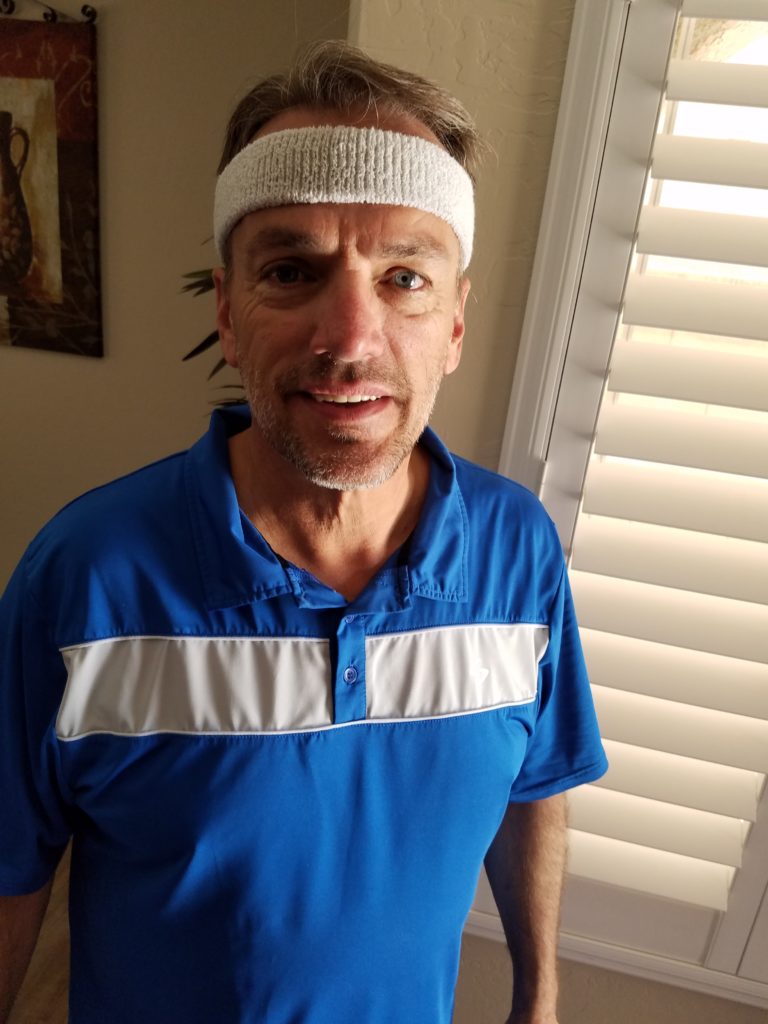 When Wayne Shoffner swings a racquet, he grips the fountain of youth in the palm of his hand. The 59-year-old Las Vegas resident prides himself on shocking fellow racquetball players when he reveals his age, many of whom swear he must be decades younger due to his agility and competitiveness on the court. Even Wayne’s doctor hasn’t seen the impressive biomarkers of health for a man Wayne’s age (a cholesterol level that never goes above 138) in many years.

For Wayne, his secret weapon isn’t so secret. Most health conscious people know exercise is a great way to lower mortality risk, but it takes a Health Hero to keep showing up on the court—even when tired or in a bad mood. Wayne himself sometimes finds he can be resistant to playing, but when he considers how energized and de-stressed he’ll feel afterwards, then the decision is easy.

Healthy competition has always been a motivating factor in Wayne’s life. As a kid growing up in Wichita, Kansas, his father encouraged him to play little league football. As Wayne got older, he played softball, volleyball, and pick-up football. It wasn’t until age 21 that Wayne picked up a racquet, and—to his surprise—he was beaten by a woman. This stirred his competitive spirit, and he spent the next 12 months focused on improving his racquetball skills. A year later, at the same competition, he beat everyone on the court. However, he didn’t pick up racquetball seriously until he moved to Orlando, Florida a couple of years later due to a job opportunity with IBM.

Wayne thought in those days he was a pretty decent racquetball player. But when joined the Orlando Tennis and Racquet Club, he came up against some stiff competition. Once again, his competitive spirit spurred him on to train harder, and it wasn’t long until he was playing in tournaments up and down the Florida coast—from Jacksonville to Miami. At one point, he took 3rd place in the Men’s Singles B Division and eventually worked his way up the A Division. As a doubles player, he proved to be a strong player—consistently competing in the Men’s Open Division.

Eventually Wayne got married and had 4 kids—2 boys and 2 girls—and so his time on the court became more sporadic as he poured his energy into coaching his kids’ baseball and basketball teams. As a result, his weight eventually crept up to 258 lbs and his waist went up to 38 inches. Once the kids went off to college, however, Wayne started seriously training again for competitions, and he’s now at a trim 200 lbs with a 33 inch waist. He and his wife moved to Las Vegas a few years ago, and Wayne is now ranked 4th in men’s doubles in the state of Nevada and is aiming to get ranked in singles over the coming months. He also just competed in the National Singles Tournament in California.

Wayne can be found on the court at least 3-4 times a week. He’ll sometimes play from 6am-9:30am in the morning, or he’ll put in a few hours after work. He also recently started improving his diet—eliminating refined carbs and soda. When asked what he likes most about the sport, he shares that he loves how good he feels after a game and how much he enjoys the camaraderie. Wayne enjoys meeting and competing against all kinds of people—from college students all the way up to people in their 50s and 60s. He especially loves to play on challenge courts—where a person signs up to play against other racquetball players and keeps playing until eventually he or she is defeated.  This feeds both his love of competition and camaraderie. Known for his killer serves, Wayne always keeps his opponents on his or her toes. If something isn’t working, whether it’s a dry serve to the forehand or the backhand, he can change it up with a Z serve or a powerball serve or a lob serve—throwing his opponents off-guard.

What ultimately drives Wayne’s love of racquetball is the peace of mind he gets knowing that he is doing something good for his mind and his body. Wayne knows those benefits will last for years to come, allowing him to better enjoy his time with his family. This peace of mind was also Wayne’s impetus for getting life insurance. Initially he had a simple policy through his employer, but if he wanted any add-ons that gave him coverage beyond a payout that equaled 1 year of his salary, the extra cost was too much for him.

When he moved to Vegas, he started looking for other policies. But it wasn’t until he discovered Health IQ in December that he found a policy that justified the monthly fee. Wayne shares that the application process was very easy and with Health IQ, he got a $250,000 policy for only $79 a month. A similar policy through other companies would cost him $190 a month. For Wayne, Health IQ was a no-brainer. He says he recommends Health IQ to his fellow racquetball players and loves that Health IQ financially rewards athletes and health conscious people for all the dedication they put into their sport.

When asked what is the secret to his fountain of youth, Wayne simply says, “You’ve got to stay active in order to stay healthy.” We at Health IQ share the same mentality and though it may seem simple, it definitely takes a lot of hard work to be a Health Hero. Thanks Wayne for being an inspiration to us all here at Health IQ.

Healthy Valentine’s Day: Getting Your Groove On for a Fit and Flirtatious Day