Running and intelligence have been linked for as long as anyone can remember, but scientists have only recently started to delve into proving that it is scientifically true.

Prior to these two newly published studies, scientists knew that exercise creates new brain cells. But a study published in the Journal of Physiology concluded that only certain kinds of exercise actually result in new brain cells being created.

What creates more cells than any other physical exercise? Running. 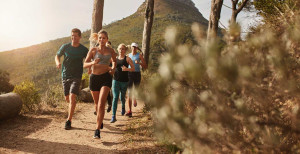 There is a protein in your brain called BDNF that is informally referred to as “Miracle-Gro for the brain.” It supports growth and health of new cells and neurons, which results in memory and learning capacity being increased. Think of it as your brain’s version of having more pens, paper, and books for it to keep learning.

The second of the two studies, published in Cell Metabolism, looked in depth at a protein called CTSB, which helps BDNF sustain a higher level and frequency of cell growth.

Researchers concluded that running regularly activates this CTSB protein— and results in both increased memory capabilities and learning capacity. When tested in runners, BDNF increased as much as 171% after 7 days of running at least 30 minutes.

As research continues to evolve, it will be exciting to see what other connections are made!

Mobility Training: Why You Should Be Incorporating Mobility Into Your Workout

This Week’s What Do I Need to Know About……Coffee, Mini-Workouts, and Squats

New CDC Mask Guidelines: Recommendations for People Who Have Been Vaccinated

Growing Vegetables: Five Healthy Reasons to Get Into Gardening

How to Prepare for Your Insurance Medical Exam